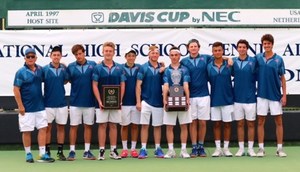 Palisades is the king of high school boys’ tennis. At the 18th annual National High School Tennis All-American Championships held last week, the Dolphins overcame a 2-1 deficit against Harvard-Westlake to win five out of the six singles matches and earn a 6-3 victory to claim the prestigious title.

The defending City champions swept through the nation’s best teams defeating Sage Hill (Calif.) and Greenhill (Texas) to advance to Saturday’s semifinals. Palisades then beat Menlo Prep, 6-2, to advance to the finals.

Congratulations to the players and Coach Bud Kling for capturing the championship and earning the lofty No. 1 ranking in the nation. This was Coach Kling's 1,131st victory as he closes in on the national record of 1,222 wins by a tennis coach.

Earlier this season, despite the absence of one of Pali's top singles players, the Dolphins defended their 2016 title and won the Division 1 Championship at the 2017 California Tennis Classic in Fresno. A tip of the hat to Palisades players Jake and RJ Sands, Lucas and Lincoln Bellamy, Diego Huttepain, Henry Lovett, Jack Harrington, Danilo Milic, Alex Strohmeier and Jason Freedland.